Home » The Foundation in Action » The Montfort Foundation receives a $100,000 donation at the Infinity Cares Gala.

The Montfort Foundation receives a $100,000 donation at the Infinity Cares Gala. 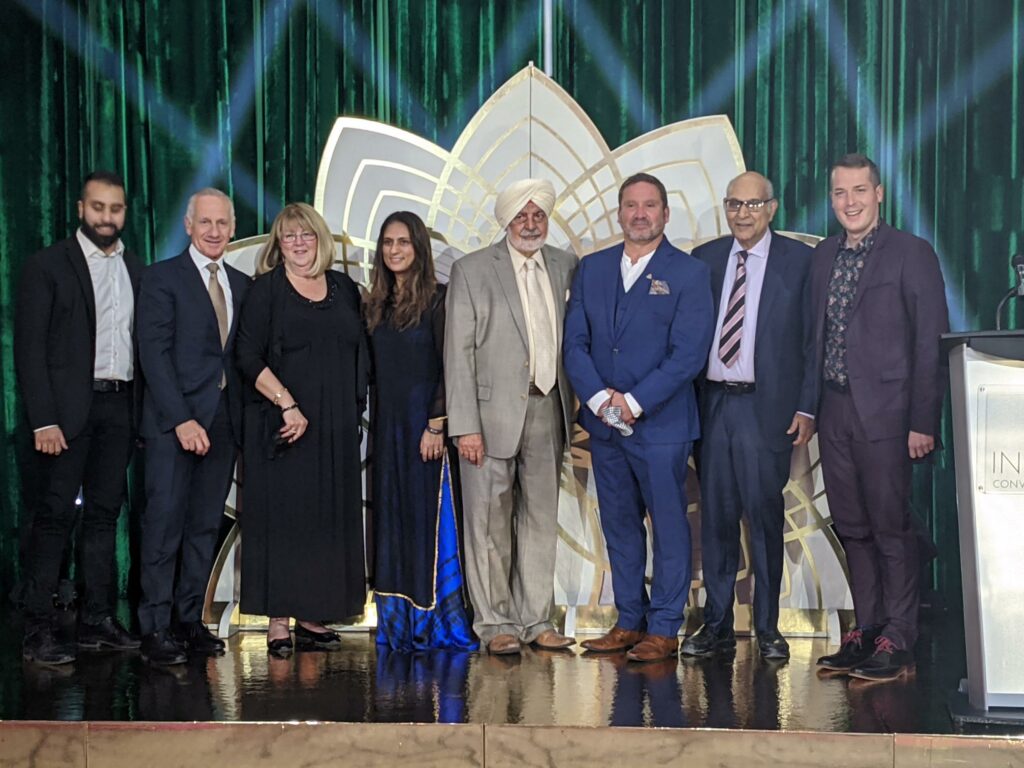 Ottawa, November 16, 2021 – The Infinity Cares 2021 Gala was held on November 12 at the Infinity Convention Centre to benefit the Hôpital Montfort, the first time this has been held since 2019. This annual event raised $100,000, which was donated to the Montfort Foundation. By choosing Montfort as the beneficiary of their generosity, the donors decided to put the spotlight on this institution that was described as the “little hospital of the East” and that is now recognized as Ontario’s Francophone academic hospital, offering exemplary person-centred care.

This is a point that the President and CEO of the Montfort Foundation, Marc Villeneuve, did not fail to mention during his thanks pronounced in front of approximately 600 people from the Indian business community of Ottawa, all gathered in a festive atmosphere to celebrate the time, talent and treasure of these exceptional donors.

The idea for the donation to the Hôpital Montfort came about during a conversation between Dr. Rohit Gandhi, an emergency physician at the Hôpital Montfort and a researcher at the Institut du Savoir Montfort -the Knowledge Institute -, and Mr. Anand Aggarwal, owner of several buildings in Ottawa and co-owner of the Infinity Conference Centre.

It is through their “Infinity Cares” philanthropic initiative that Mr. Aggarwal and the Sohal family, business partners and co-owners of the Infinity Conference Centre, have chosen to give to Montfort. It is clear that this association, however natural between the Sohal, Aggarwal and Montfort families, is made possible by their shared values of compassion and respect.

The significant contribution to the Montfort Foundation will allow it to meet the priority needs of the hospital, enabling it to remain the reference hospital for exceptional health care services while improving research in both official languages.

The members of the Board of Directors of the Fondation Montfort, Mr. Albert Labelle, Mr. Alex Rizk and Mrs. Marie-Josée Martel, as well as Mr. Ronald Caza, President, were present at the event. Mr. Caza was unable to attend but had prepared a video in which he presents the important achievements of the Hôpital Montfort. The Federal Minister and President of the Treasury Board, the Honourable Mona Fortier, Mr. Ajay Bisaria, High Commissioner of India to Canada, as well as the City Councillor of Rideau-Vanier, Mr. Mathieu Fleury, were also part of the celebrations.

About the Sohal and Aggarwal families
Together, they own the Infinity Congress Centre and numerous hotels in Ottawa. Mr. Anand Aggarwal won the annual Ottawa Immigrant Entrepreneur Award from the City of Ottawa for his entrepreneurial success in Canada. In 2019, he received the Order of Ottawa for his professional contributions to significantly enriching municipal life. Together they are outstanding donors to area institutions such as the Montfort Foundation.