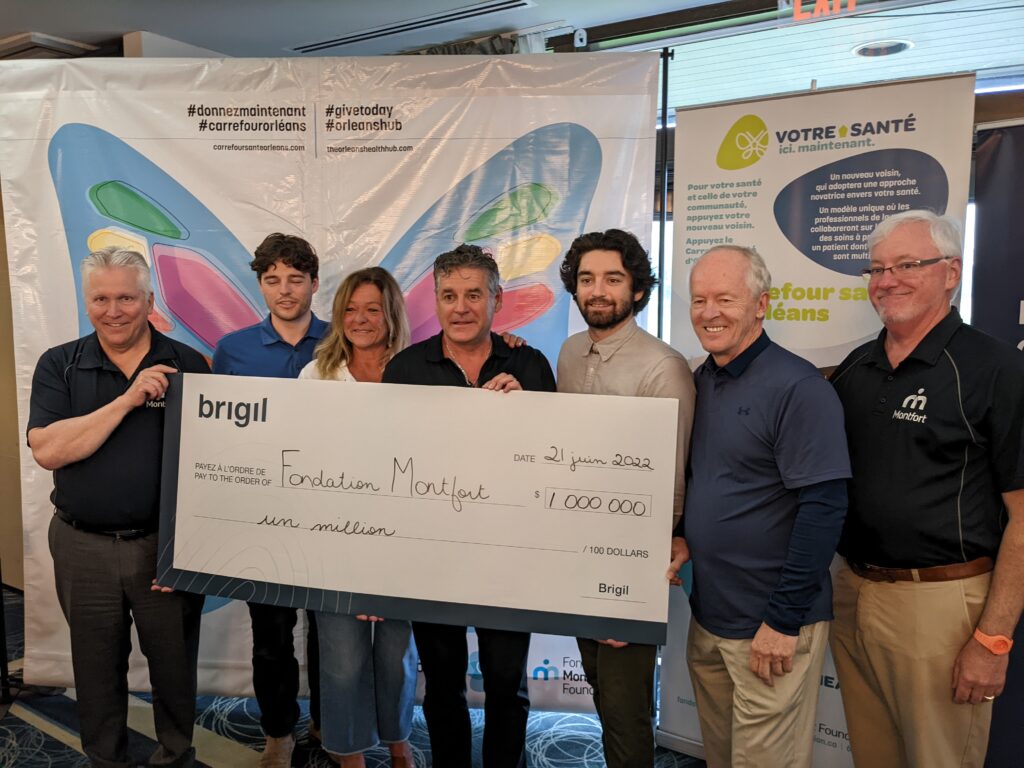 Gilles Desjardins, President of Brigil, announced at the Montfort Foundation’s annual benefit golf tournament an exceptional contribution of one million dollars to the fundraising campaign for the Orléans Health Hub.

Mr. Desjardins has had the Montfort Hospital on his philanthropic radar for years and was delighted to advise Campaign Chair Yves Tremblay and Montfort Hospital President and CEO Dr. Bernard Leduc of his intention to help improve care for the community in Ottawa’s east end.

“As a citizen builder, I am delighted that my family and I are able to announce today a major support to the Fondation Montfort.  Since 1985, we have been working for the development of the National Capital Region and, in this sense, our objectives are in line with those of the Foundation.  I myself was born in Montfort and I have always had at heart the provision of quality health care for our Franco-Ontarian community,” says Gilles Desjardins.

Dr. Leduc says “Mr. Desjardins has often supported our initiatives and events in Montfort over the years, as well as those of many organizations in Ottawa.  He had already told me that he had his eye on our institution for an exceptional contribution.  His promise was fulfilled. The extent of his contribution to the Orléans Health Hub is a highlight of his commitments. Our patients and their families are so grateful!

The $1 million donation brings the total raised in the current major campaign, which has a goal of $12 million, to $10.7 million. According to Yves Tremblay, president of the campaign cabinet, “Mr. Desjardins has once again demonstrated his great generosity and has made a significant contribution to the development of Montfort. With this donation, Mr. Desjardins joins my family and other very generous donors in supporting Montfort in its quest for excellence. I am proud to count him among my allies in this campaign.

The Montfort Foundation, the Montfort Hospital and the partners of the Orléans Health Hub are very grateful to Mr. Desjardins.  This important financial support will allow Montfort and its partners to innovate and provide exemplary care and services to the East Ottawa community through a new model of care, centered on the patient and their needs, and in both official languages.

Gilles Desjardins has also been recognized as one of Quebec’s leading philanthropists and was awarded the Meritorious Service Medal of Canada by the Governor General on November 5, 2018. The company currently has about 30 communities in the National Capital Region (14,000 units) and plans to build 44,000 new housing units over the next 15 years. Sustainable development and environmental protection are part of Brigil’s DNA, as is the enhancement of heritage and historic buildings. This is why our mission goes beyond that of a builder.

We are citizen builders.