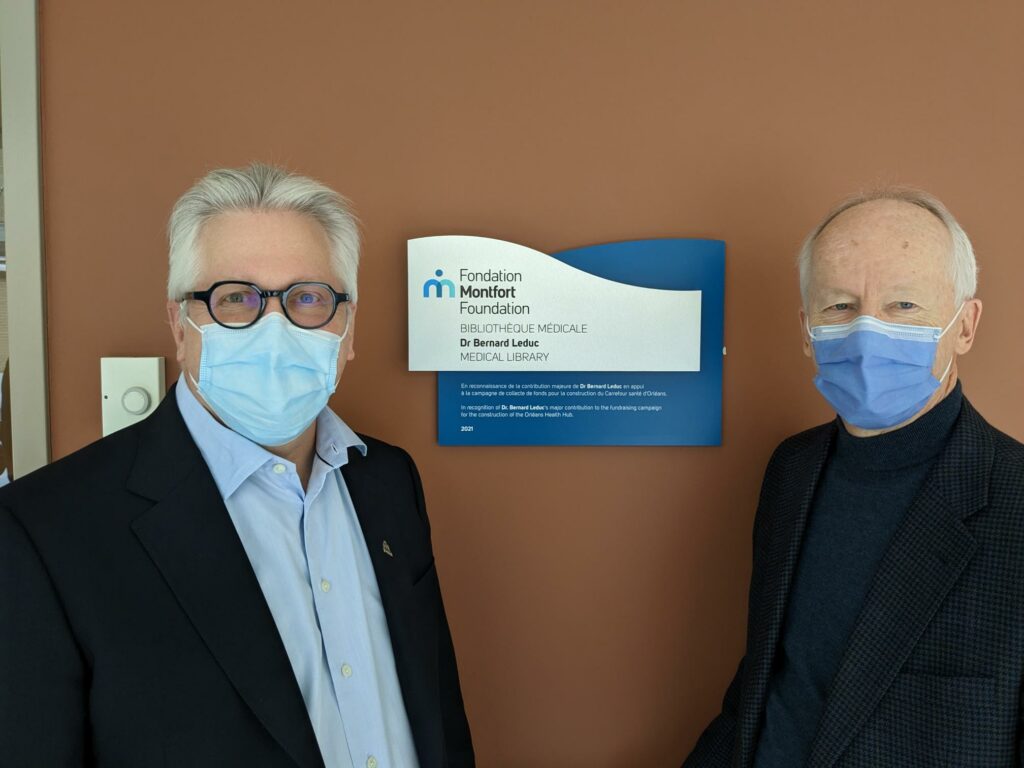 The roles and responsibilities have multiplied for the indefatigable Dr. Bernard Leduc since his arrival in January 2010 as President and CEO of the Hôpital Montfort, after having accumulated more than 27 years of experience practicing family medicine.

And despite his very busy schedule, Dr. Bernard Leduc finds time to participate in various committees and boards of directors where he puts his experience and talent to good use.

More than just time and talent to give

“The Hub is a necessary first step in the development of an integrated, person-centred, community-based approach to care and close to the community.”

The Aline-Chrétien Health Hub Orléans is a unique and innovative model that brings together, under one roof, a range of specialized and community-based care services, allowing for better coordination of services offered, simplified access as well as reduced travel for patients.

A gift that follows in the footsteps of the past

On September 9, 2021, Dr. Bernard Leduc made a pledge to the Montfort Foundation to donate $50,000 to the fundraising campaign for the construction of the Hub, an important project that he believes will greatly improve the quality of health care services in the region.

“I believe strongly in the project. I have been fortunate to work in the health care system and I believe we all have an obligation to give back to improve it. This was a great opportunity for me.”

This exceptional commitment to the Hub is not unique, however, as this philanthropist has supported several projects put forward by the Montfort Foundation for more than $150,000, to this day.

Throughout his career, Dr. Leduc has had a professional impact on the Montfort’s evolution, first as Chief of Staff (2004 to 2009) and then as CEO since 2010. He also had a humanistic impact through his numerous altruistic commitments to the community, such as his support to Aboriginal communities. His medal of the Order of Ottawa is a testament to this fact.

In recognition of his gift to the Hub, the Montfort Foundation has installed a plaque in the medical library at the Hôpital Montfort. Congratulations Dr. Leduc for this well-deserved honour.

The Montfort family is privileged to have in its ranks a person of great value and exceptional generosity such as Dr. Bernard Leduc.